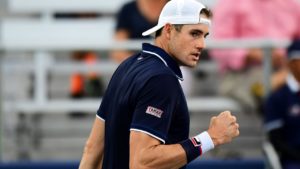 James Blake isn’t the only younger player who is making a strong case for going to college before going to the pros. Two of his former opponents are making waves on the pro circuit as well: Georgia’s John Isner and Illinois’ Kevin Anderson. Isner, who was named the 2007 Farnsworth/ITA National Senior Player of the Year, finished his senior year ranked No. 2 in the nation. Before leaving his Bulldog teammates, Isner helped lead them to a perfect 32-0 season, and two national team titles. Isner also racked up one national singles title, three national doubles titles, and was named an ITA All-American four times in his career at UGA. Since turning pro in June of 2007, he has climbed all the way to the top 10 ATP!

Isner opens up about his choice of going to college:

“For me, to tell you the truth, I never even thought about going pro [after high school],” Isner said. “If I didn’t go to college, I really don’t even know if I would be playing tennis now. A lot of players leave high school and go straight to the pros, and they don’t make it and don’t have success, so they burn out after two or three years. For sure, if I hadn’t played for four years at Georgia, I don’t think I would be where I was now.”

Isner also drew on his time at Georgia to help him prepare for the biggest matches of his career. While he admitted that winning a lot of matches in college gave him confidence to take on the toughest professional players in the world, Isner recalled that it was the pressure-packed situations that helped him keep his cool on Center Court.

“Playing at Georgia, we’ve always played in front of huge crowds, especially in May,” Isner said. “There was a lot of pressure on us as a team to play well because we were expected to win. Obviously playing Andy [Roddick] in an ATP final, there’s a lot of pressure, but I don’t think it compares at all to playing in NCAA’s at Georgia, with five or six thousand people watching you play. Every match was pressure packed, and I was able to stay calm and play my game. Playing at Georgia helped out because that was playing for the team, and that’s a lot more pressure to succeed: you don’t want to let your team down.”

While at Georgia, Isner underwent a lot of physical changes as well. The 6’9” right-hander admits that his time as a Bulldog helped him become the physical force we see on the court today, as he put on over 40 lbs.

“[College] was the best preparation I could have ever asked for,” Isner said. “In those four years, I had unbelievable coaching with Coach Diaz. I learned so much mentally, and I got so much stronger physically. Coming out of high school I was tall, skinny, and gangly, not strong and not mature. I was none of that. I had to go to college and get stronger. I had to start growing out instead of up.”

This trend doesn’t look to be stopping any time soon: while Blake, Isner and Anderson all made it to the top 10 ATP. Their incredible journey indicates the wave of success from college to the pros.