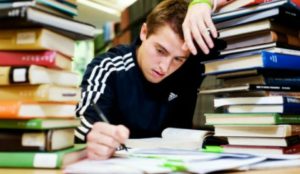 As usually preferred, let’s start with the bad,

– Student-athletes are stressed out
Although this may not be news to many athletes, in college, student-athletes really need to pull out their extra powers at times. Balancing schoolwork and athletic responsibilities, student athletes often report more stress than non-athletes. Student life can be stressful enough, but according to Athletic Insight’s Study, student athletes reported higher than usual stress in several variables, including: having lots of responsibilities, not getting enough time for sleep, and having demanding extracurricular activities. However, athletes do enjoy lower stress in some variables, like social isolation and satisfaction with their physical appearance.

– College athlete may soon be paid
The most surprising and exciting fact for college athletes is that they may actually be paid for playing at some point in the near future. Many student-athletes expressed their opinion that collegiate players are being exploited by not receiving money. A legal movement started a few months ago to ensure that the law about paying student-athletes will change, so make sure to be on-board with StAR asap!